There is an ancient saying that is probably familiar to you: God is a circle whose center is everywhere and whose circumference is nowhere.

That center is me and you, and it is incumbent on each of us to make the journey from the margins to the center of our being.

There is a new religious consciousness emerging along an entire spectrum of authentic connection to this center: from Liberation theologies to engaged Buddhism; from the New Story emerging from quantum physics to the rise of indigenous voices on behalf of the planet. This realization that we are all connected, that we rise or fall together, that everything is because of everything else, is now giving voice to the voiceless, connecting the disconnected and widening our circle to include those who have been excluded.

Prisoners are not on the margins. They are at the very center. And in the midst of an inherently violent and dehumanizing system that would relegate them to the status of non-persons, they can claim their person-hood. By virtue of their participation in our collective wholeness, learning how to become receptive to the rhythm of the ultimate structure of the universe, they become not the victims of a degrading system but the very instruments of its transformation.

We on the outside are also transformed. As the grip of a prison system that threatens our innate human capacity for compassion begins to loosen, we realize how it rends the fabric of our inherent connection to each other and we begin to withdraw our support, realizing that to endorse it is to participate in its violence, thereby doing violence not only to the prisoner but also to ourselves.

“When taking a walk in the beautiful place of forest and meadows where I am so privileged to live, feeling the warmth of the sun and a slight breeze that made me want to lift my arms as though in flight, I sensed my friends in prison. I thought about a question one of them had asked me:

-- When did you know that we weren’t on the margins but at the center? --

I knew when you looked into my eyes and I saw myself reflected in yours. Because you have allowed me to accompany you to the center of your freedom, I more deeply live my own. When I think of you, I lift my wings in flight.” 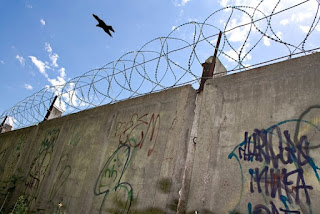